As the election approaches, we have many different events planned and there will be events and important information that pop up on a regular basis.  So, we are beginning a new weekly newsletter update to ensure that you never miss a beat.

For the week of, September 21st:

We are asking you to please send any endorsement sheets and/or voter guides from other organizations you belong to so that we can compile them all on a blog page.  We recognize that many voters use endorsements from organizations that have missions they support and voter guides with a range of questions while preparing to vote.  You can send this information to:  lwvnv2020@gmail.com

If you were unable to attend our ballot question forum on Saturday the 19th, we recorded the event and it is now on our LWVN blog, along with additional information about Ballot Question One: https://lwvnvblog.org/new-2020-ballot-questions-analysis/

You can read the pro and con sides of each ballot question here:

Question No. 1: Board of Regents

Question No. 3: Pardons Board

The League of Women Voters of Southern and Northern Nevada is currently partnering with the American Association of University Women to record conversations about education with the education candidates.  You can watch the recordings we have so far here: https://lwvnvblog.org/edconvo/

The Jewish Film Festival is lifting up our indigenous community this year by featuring our United States Poet Laureate, Joy Harjo.  The League of Women Voters of Southern Nevada is a cosponsor of the event.  You can RSVP for the virtual events here:  https://www.lvjff.org/let-there-be-no-regrets

On Friday evenings, until October 30th, we are hosting Judicial Candidates & the Courts Open House events via Zoom, 6-7:30 pm, you can RSVP for the September 25th meeting here: https://actionnetwork.org/events/judicial-candidates-the-courts-open-house/

During these open house events, we meet the judicial candidates and discuss how our judicial system works.

Starting on Saturday, September 26th, we will be hosting Education Candidates Open Houses with our education candidates.  You can RSVP here: https://actionnetwork.org/events/education-candidates-open-house/

We will meet the candidates and chat about education in Nevada.

Lastly, the election is fast approaching, so now is the time to start preparing to vote early to stay safe, whether you vote by mail or in-person, please vote early.  You can review the election rules and processes here: https://lwvnvblog.org/updates-2020-general-election/

Nevada is stronger when we work together.

Join the LWVNN, via Zoom, 10 am to Noon, for our September 19th Community Meeting.

Join us Saturday afternoon, 9/19, Noon to 5 pm, for our Drive Through Voter Registration drive. Please consider a donation if you cannot volunteer, you can donate through the PayPal Donation button here:

Join LWVNN 10 am to Noon, via Zoom, for a panel on election security.

There are 5 questions on this election’s ballot. You can read the pro and con arguments from the Secretary of State’s Office bellow. We are also offering a Ballot Question Forum on 9-19, via Zoom, 9 to 11 am, RSVP:

Question No. 1: Board of Regents

Question No. 3: Pardons Board

Our Secretary of State’s Office created this list of processes, facts, and myths about our 2020 General Election.

Here is a easy to read Facts & Myths handout:

LAS VEGAS NEVADA – Joy Harjo is an internationally renowned performer and writer of the Muscogee (Creek) Nation and was named the 23rd Poet Laureate of the United States in 2019. She is the first Native American to be so honored.

Joy will read poems from her new publication An American Sunrise via Zoom on Tuesday, September 29 at 5:00 p.m. (PST).  She will also participate in a webinar conversation with author Terry Tempest Williams about the August, 2020 publication of the first Norton Anthology of Native American Literature, When the Light of the World Was Subdued, Our Songs Came Through, on Thursday, October 1 at 5:00 p.m.

The author of nine books of poetry, plays and children’s books, and a memoir, her honors include the Ruth Lily Prize for Lifetime Achievement from the Poetry Foundation, the Academy of American Poets Wallace Stevens Award, a PEN USA Literary Award, Lila Wallace-Reader’s Digest Fund Writers’ Award, a Rasmuson US Artist Fellowship, two NEA fellowships, and a Guggenheim Fellowship. Harjo is a chancellor of the Academy of American Poets and is a founding board member of the Native Arts and Cultures Foundation.

Terry Tempest Williams is an American writer, educator, conservationist, and activist. Williams’ writing is rooted in the American West.

A webinar discussion of the documentary will be on Wednesday, September 23 at 5:00 p.m. moderated by Joshua Abbey, Director of LVJFF featuring Justice Raquel Montoya-Lewis and Professor Andrew Woolford Ph.D. with the University of Manitoba.

Professor Andrew Woolford Ph.D. is the former president of the International Association of Genocide Scholars whose research is centered in the field of genocide studies, with specific emphasis on cultural techniques of group destruction deployed against Indigenous Peoples in North America. He is the author of This Benevolent Experiment: Indigenous Boarding Schools, Genocide and Redress in North America.

LET THERE BE NO REGRETS

The songs and stories that formed us are restless

and need a place to live in the world of our grandchildren.

They are weary with waiting.

Though desperate thoughts fed by money hunger roam our minds

To the destroyers, Earth is not a person.

They will want more until there is no more to steal.

Earth who does not know time is patient.

The destroyers will destroy themselves.

So many earth spirits take care of this place.  They emerge from the cliff walls.

They emerge from the waves of waters.

Our ancestors are not only human ancestors.

What do you see when you fly to the top of the ancestor tree?

Let there be no regrets, no sadness, no anger, no acts of disturbance to these lands.

—from An American Sunrise, by Joy Harjo

The Joy Harjo program series is presented by:

The Joy Harjo program series is supported by:

Join the League of Women Voters of Nevada on Friday, August 21st, 6-7:30 pm, for our first in a series of Judicial Candidates Open Houses.  We’ll be chatting about the courts with the candidates.  RSVP here for the Zoom link:

Join the League of Women Voters of Southern Nevada on Saturday, August 22nd, 9-10:30 am, for a workshop on being a good ally. RSVP here for the Zoom link:

You can read a PDF version of the Clark County Election Department August-September newsletter, which includes all the information needed for the upcoming general election, here: 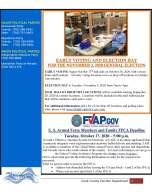 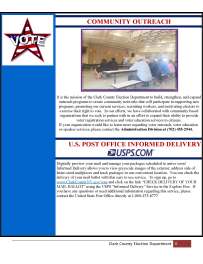